The short, forward curving horns are only found on rams. The Mountain Reedbuck is a grazer and requires an adequate supply of fresh water. When it runs, with its rocking gait and with tail up, it shows its white underside. Mountain Reedbuck occur in small groups of 3 - 8 though groups of up to 30 have been seen together. Larger groups of Mountain Reedbuck are temporary as they will disperse into smaller units when disturbed.

Young Mountain Reedbuck rams are forced out of herds to form bachelor groups, until sexual maturity and until they young rams are ready to challenge the of territorial rams for the right to mating . Usually there is only one adult ram in a family group. The natural habitat of the Mountain Reedbuck is, as their name suggests, mountainous and they can be seen on mountain slopes feeding or resting in the shade and cover of the thick bush. Mountain Reedbuck graze and drink early in the morning and during late afternoon or even at night, usually resting in the shady spaces of their habitat during mid-day.

Mountain Reedbuck can be difficult to stalk and hunting Mountain Reedbuck will probably demand a shot of considerable distance. As for most of the medium sized antelope, a rifle of .270 calibre or of the other flat shooting calibres would be a correct choice. 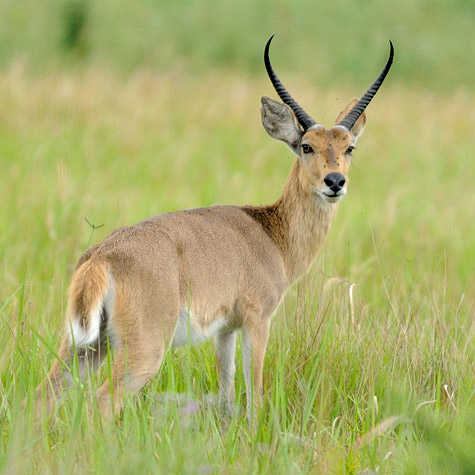