One of the Big Five animals, the Rhinoceros is the largest land mammals after the elephant.   There are two species of African rhinos.   The African species are the white and black rhinoceroses.   Both species have two horns.   They range in height from four and a half feet to six feet and can weigh from 750lbs to 8000lbs.   Rhinos are herbivores, eating only plants. White rhinos, with their square-shaped lips, are ideally suited to graze on grass, whilst the black rhino is a browser, preferring to eat the foliage of trees or bushes. Solitary creatures, both male and female rhinos establish territories.   Males mark and defend their territories.   Rhinos use their horns not only in battles for territory or females but also to defend themselves from lions, tigers and hyenas.   Males and females frequently fight during courtship, sometimes leading to serious wounds inflicted by their horns.   After mating, the pair goes their separate ways.   A calf is born 14 to 18 months later.   Although they nurse for a year, calves are able to begin eating vegetation one week after birth.    Valued for their horns, they face a serious threat from poaching.   Some cultures believe that the powdered rhino horn will cure everything from fever to food poisoning and will enhance sexual stamina.

The minimum calibre for rhino is the .375 Magnum.   A shot behind the shoulder, correctly placed, is all that is required.   Usually shots are not over 50 yards.    Rhino are judged on the length of both horns and their base circumference, added to give a total score.   Rhino usually hold their head low to the ground and broadside judgment of horn length is relatively simple, the indicator being the height of the front horn relative to the ears.   When directly facing the animal, the horn should run above the ears as far as possible.   A good bull will have a visibly impressive front horn starting from a wide base close to the front lip and curving up above his ears when the head is held up.   Cows generally have longer thinner and straighter front horns and thin bases but it is not uncommon for bulls to have straight horns as well. 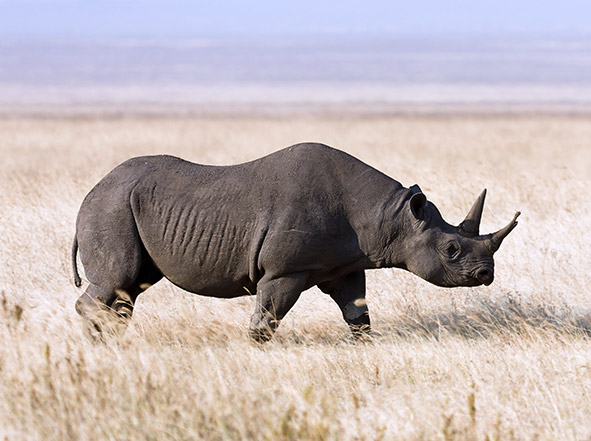