The Chacma Baboon, also known as the Cape Baboon has a body length of up to 115 cms and a weight from 15 to 31 kgs, it is among the largest and heaviest of the baboon species. The Chacma Baboon is dark brown to grey in colour, with a patch of rough hair on the back of its neck. Unlike the Guinea, Hamadryas, and Olive Baboons, Cape Baboon males do not have a mane. Possibly the most distinctive feature of this baboon is its long, downward sloping face.

Males can have canine teeth longer than a lion's, at up to 2.6 cms. Male Baboons are considerably larger than female Baboons. The Cape Baboon is found in Southern Africa, ranging from South Africa, North to Angola, Zambia, and Mozambique. Size and colour vary within that range. The Cape Chacma Baboon (P. ursinus ursinus), from Southern South Africa, is a large, heavy, dark brown Baboon with black feet. Chacma Baboons live in social groups composed of multiple adult males, adult females, and their young. Occasionally, small groups form that includes only a single adult male and several adult females.

Cape Baboon troops have a dominance hierarchy. The female ranking within the troop is inherited through the mother and remains fixed, while male ranking is often turbulent, especially when the Alpha Male is replaced. Chacma Baboons are unusual among baboons in that neither males nor females form strong relationships with members of the same sex. Instead, the strongest social bonds are often between unrelated adult males and females. Infanticide is common in Chacma Baboons, as newly dominant males will often attempt to kill those young baboons sired by the previous Alpha Male.  Chacma Baboon troops evince complex group behaviour and will communicate by means of body stances, facial expression, sounds and touch.

Chacma Baboons inhabit diverse habitats, from the grassy slopes of the Drakensberg to the Kalahari Desert. The Chacma Baboon is omnivorous and prefers fruits, but will also eat insects, seeds, grass and smaller animals. The Chacma Baboon is a bit of a scavenger when it comes to game meat and rarely hunts large animal species. There has been at least one incident where a Chacma Baboon has killed a human infant. However, the event is rare. Usually Chacma Baboons will flee at the approach of humans.

Many farmers treat Chacma Baboons as pests and are happy to see them hunted. Calibres of .270, .308 and 7mm upward are suitable for Chacma Baboons. 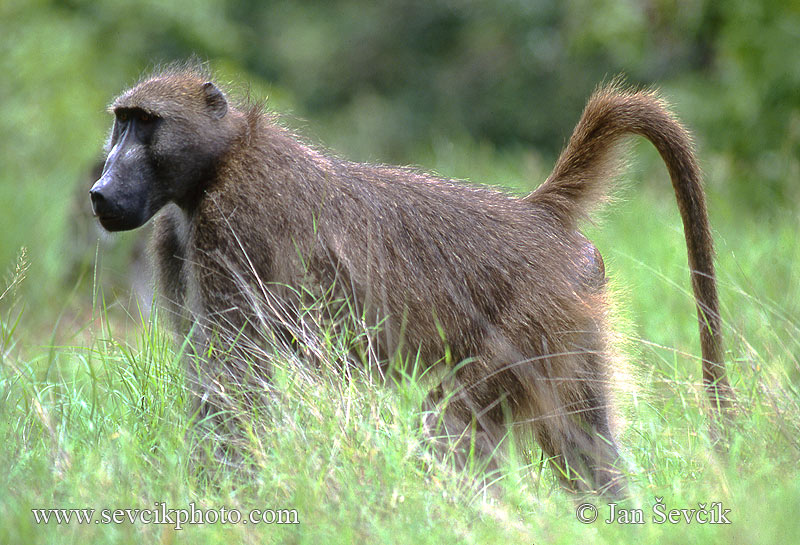